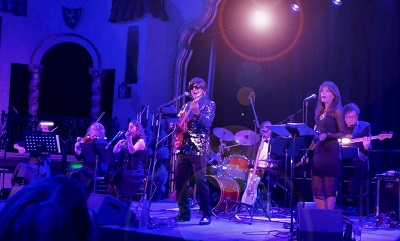 David K sings Roy Orbison’s multi-octave range beautifully, with ease and power. The string players perfectly perform their parts exactly like the record. David’s musicians are excellent making for an entertaining and moving show. Bits of history are sprinkled throughout the performance adding a touching flashback to a legendary list of hit songs that span decades. Roy Orbison had tragedy in his life, but he always conquered the sadness with success. And that success offered up passionate, operatic ballads as well as rockabilly rockin’ party tunes.

This show covers the early years from the late 50s early 60s, through his 70s songs in movies, to his reappearance with the Mystery Girl album in the late 80s, his 22nd produced by Jeff Lynne of ELO, and then his last years with The Traveling Wilburys. David K sings some Wilburys hits, as well, a band that had 5 rock and roll hall of fame members, Bob Dylan, Tom Petty, George Harrison, Jeff Lynne of ELO and of course, Roy Orbison. Don’t miss this show, a holiday season celebration of a true legend. See videos and more bio on David K at www.royshow.com